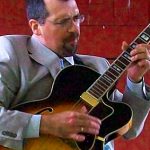 In pursuit of the tone – namely the sound of Wes Montgomery – I abandoned using a pick several years ago. While it has is drawbacks when I’m looking to strum (especially in say a funk context) I’m a convert otherwise: It’s fine for comping, and great for chord soloing and single-note octave lines. I find it affords a much greater range of tonal colours and expression: Virtually never use the volume knob anymore, except to set an initial level, any volume modulations I need can be accomplished in a “tactile” manner. For that matter, I never end up touching the tone knob, as a wide range of tonal colours are a literally at ones fingertips when playing without a pick. While Wes only used his thumb while resting his fingers on the guitar, I’ve found using my index, middle and (on occasional) ring fingers – in a sort of hybrid classical guitar technique, though without any nails – is what’s working for me.

At the time I became interested in choosing not to pick, I was also looking for a way to more readily execute wide intervallic leaps, and integrate right-handed tapping techniques. Not so much in the interest of being the next Van Halen, but actually in pursuit of certain Coltrane/Dolphy-type possibilities. Conventionally cross-picking a line of wider intervals that alternate between, say, the low E/A strings with the top strings always struck me as a lot of work (a job best left to the John McLaughlins of the world). Finger-picking these types of intervals is comparatively simple, however.

So, though I certainly can’t recommend ditching the pick for guitarists across the board – I’d definitely in the camp that it has it’s merits for the jazz player in search of a warmer, more pliable tone, and perhaps the opening of other some doors leading to different shapes in your lines.

This site uses Akismet to reduce spam. Learn how your comment data is processed.